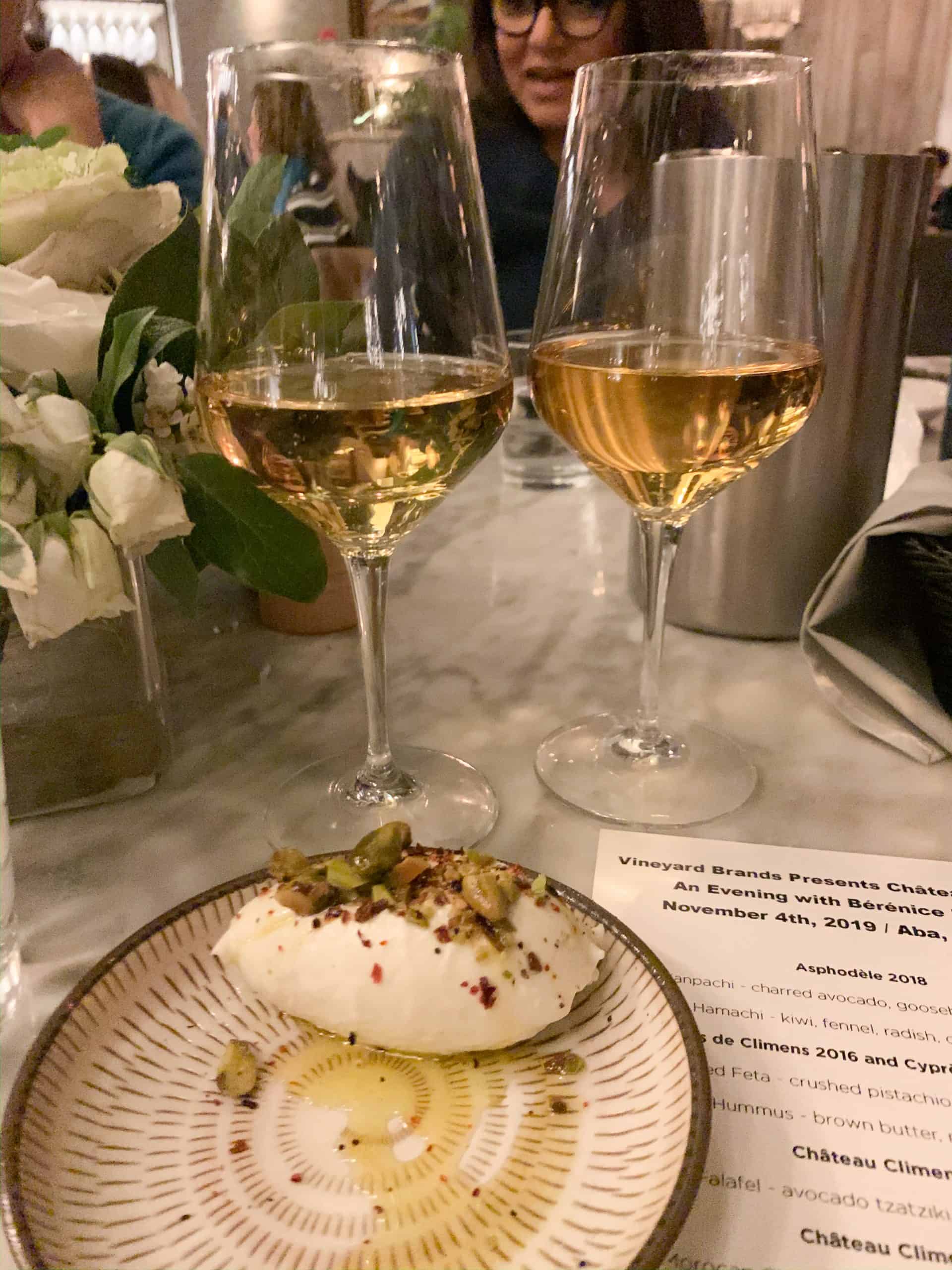 Last Updated on December 8, 2019 by JaimeSays

As the hostess began leading me to our table, a pit formed in my stomach. There were only six seats at the table. A wave of panic fell over my face, as if I lost my way somehow on my first time back to the city since since my suburban relocation.

As the first to arrive, I quickly spoke up, asking “Is it only six people on the reservation?” The hostess affirmed the count, and I immediately feared I was in over my head.

The last “intimate” wine dinner I attended was a 200 person event with microphones, drone videos, and name tags. I brought a good friend with me and sat with other wine bloggers that I had met before. I was worried that for this dinner, I wouldn’t have the luxury of blending in, and wondered if I would know any of the guests.

It turned out I would know the other guests, but not because we had met before. The three other women invited to dinner were all stars in the wine and culinary world. First was Lisa Fetterman, a longtime contributor to the Food and Drink section of the Chicago Tribune. Then Belinda Chang walked in, the James Beard Award winning, revolutionary beverage director of just about any place worth knowing. And finally, I had a brief moment where I recognized someone and thought “oh, I know you but I can’t place how,” only to realize it was the youngest woman who ever passed the Master Sommelier test and Check, Please host, Alpana Singh.

And what brought this powerhouse of Chicago women together? It was to meet with famed Semillon producer Bérénice Lurton of Château Climens along with her American importer, Vineyard Brands.

Climens: A Château Commandeered by Women

Climens is a commanding house in the Sauternes and Barsac region. Evidence of vine cultivation can be traced back to the late 13th century, and the Climens name was notarized for Château documents appear as early as 1547. The property changed hands several times, fell victim to the French Revolution as well as phylloxera, but never lost its prestige. It first won a gold medal for Bordeaux wine making in 1878.

After nearly a century under the auspices of the Gounouilhou family, a local family, the Lurtons, purchased the estate. Bérénice is the youngest of the ten children of said family, and became sole proprietor of the estate in 2009. By 2010, she had converted the whole property to biodynamic cultivation with the help of another female wine ingenu, Corrine Comme.

The influence of women in the vineyards is woven throughout each step of the winemaking process at Château Climens. On top of being owned by Bérénice, her pickers, harvesters, winemaker and marketing team are all comprised of loyal ladies who have helped retain the prestige and high quality product that is synonymous with the estate.

What’s in a Name?

Climens literally means “barren land.” It’s quite the paradox then, that Climens produces some of the freshest and liveliest wines of the region. All of the vinestock is Semillon, resulting in wines that are reflective of the fruit. The Climens name is renowned for stunning sweet and dessert wines, but that’s not all. 2020 marks the launch of the first dry wine from the estate.

A word to reders: tasting notes are generalized for cohesion and formatting as each vintage retains unique qualities that are not mentioned

Not yet available but will be debuting in the United States soon!

I’ve been on a #naturalhair journey for about 3

This website uses cookies to improve your experience while you navigate through the website. Out of these, the cookies that are categorized as necessary are stored on your browser as they are essential for the working of basic functionalities of the website. We also use third-party cookies that help us analyze and understand how you use this website. These cookies will be stored in your browser only with your consent. You also have the option to opt-out of these cookies. But opting out of some of these cookies may affect your browsing experience.
Necessary Always Enabled
Necessary cookies are absolutely essential for the website to function properly. This category only includes cookies that ensures basic functionalities and security features of the website. These cookies do not store any personal information.
Non-necessary
Any cookies that may not be particularly necessary for the website to function and is used specifically to collect user personal data via analytics, ads, other embedded contents are termed as non-necessary cookies. It is mandatory to procure user consent prior to running these cookies on your website.
SAVE & ACCEPT
It can be challenging for kids to enjoy the #chris

I’ve been on a #naturalhair journey for about 3