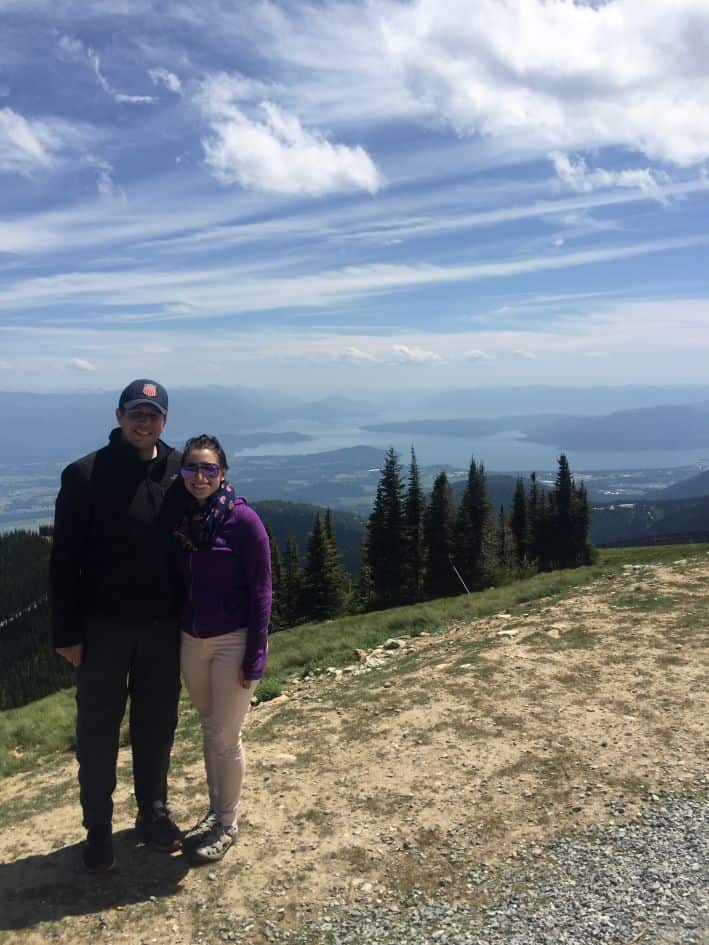 There are two families of people who are thanking their lucky stars for Eddie.  The first: a huckleberry farmer who had his out of town family visiting for the week.  He had gotten about 30 minutes away from shore when his boat would not restart.  On a 72 mile lake, it’s easy to not run into anyone.  He began to blow his airhorn and wave a neon orange flag to get our attention when we were on our boat.  We pulled up next to him, tethered our boats together, and Eddie towed his boat to near the man’s pier.  The eight people on the boat were very relieved to get back to shore!

The second rescue was more daunting.  While white water rafting, a young girl on a different boat got out of the boat to float the river. While the company told us to keep our feet forward to make sure we didn’t hit rocks, this young child did not heed the instruction.  She was barreling head first toward a boulder on the river.  I heard people shouting and then, I turned my head in time to see Eddie, hanging over the raft, pulling a child from the water and into safety.  I couldn’t believe he had to help a second person out of the water!

2) A Stranger Left his Dog With Us

As with nearly every day of our honeymoon, we started our day in Lolo with a hike.  Also like every day of our honeymoon, we were the only people on the trail.  After about a mile or so of hiking, we encountered an elderly gentleman and his dog, returning to the trail head.  We had a chat, and the man mentioned that he thought his dog would still like to stay out on the trail.  He said his dog, Griffin, walked the trail with him everyday and that he knew how to get himself home.  With that, Griffin led our hike for the next ninety minutes, scurrying on and off the path to his pleasure.  When we had trouble locating the signs for the trail, Griffin always led us the right way where we would see signage more clearly.  At the end of the hike, he walked slightly ahead of us, and turned off to his house and his food bowls.  With mountain lions, bears, and coyotes in the forest, this man and his dog were fearless!

The most unexpected thing that happened on our honeymoon, and the most pleasant, was the lack of cars on the road.  We drove 1000 miles without hitting a single patch of traffic.  Even in Boise, we didn’t run into any traffic!  When we left to explore the Sunny Slope Wine region, there as no traffic. The day we left Idaho, there were numerous road closures due to a bike rice, but luckily, we did not take them to get to the airport.

4) We Got Lost Five Minutes from Home Base

When we were in Salmon, we stayed at a somewhat remote bed and breakfast. We planned on driving to town to sit by the river and maybe put our feet in.  When the proprietors of the bed and breakfast heard of our plans, they suggested we walk over the hill right down to the river.  They mentioned there was a path that was pretty steep, but pretty short, and we could get to the water in a few minutes.  Fast forward thirty five minutes later when we see no path, are in prickly bushes over our heads, and couldn’t hear or see the river.  We turned around and ended up driving into town to see it.

5) My Neighbors Were On Our Rafting Expedition

When we were rafting, there was a group of about 45 people who were members of a large family reunion.  At lunch time, everyone mingled and talked about where they were from and what they did.  Would you believe there was a family who lived down the street from where I grew up!?  Their kids went to the same high school as me and we had mutual friends.  I’d never met them before, but apparently, we’re nearly neighbors!

Do you have any good honeymoon stories?  Drop me a comment down below!