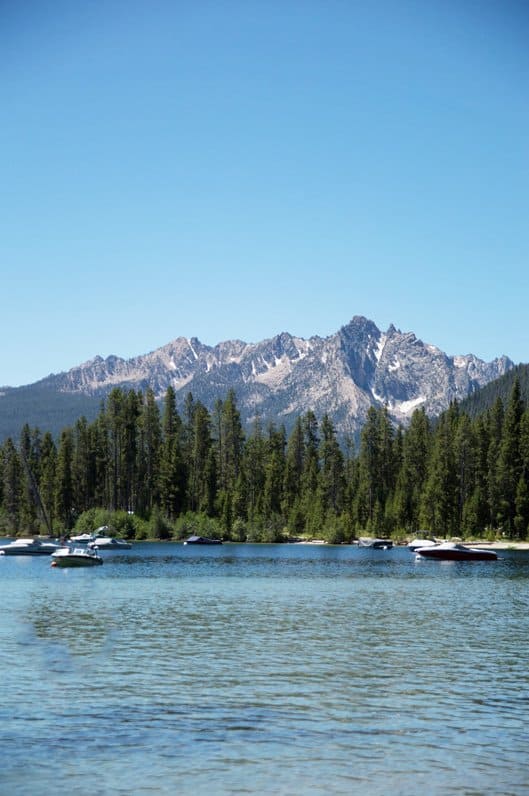 When my husband told me we should go to Idaho to celebrate our marriage and honeymoon, I told him I think he mispronounced Italy.  Then he convinced me to look into it, and I was convinced.  Here are ten fun facts about Idaho that will surprise and inspire you, just as they did me.

A Lake Deeper than 4 out of 5 Great Lakes

You may not have heard of Lake Pend Oreille, but this behemoth of a lake is Idaho’s largest.  It is nearly 72 miles from end to end, and 1,200 feet deep.  Absolutely picturesque and serene, it is rumored that American celebrities like Johnny Depp, Macklemore, and Miranda Lambert all own homes or even islands on this lake. Celebrity hobnobbing could be one of the fun facts of Idaho, but the beauty of the lake and its surroundings far surpass any celeb sighting.

A Lake the U.S. Navy Uses to Test Submarines

Lake Pend Orielle is home to the U.S. Navy Acoustic Research Development station.  As the lake is the deepest and quietest lake in Idaho, the Navy tests sonar drones, submarines, hydroacoustics and more.  This research proves to be very valuable to the Navy, and a point of pride for citizens of the area.

How’s this for some fun facts about Idaho: did you know that huckleberries are a real thing?  This midwestern girl had no idea that there was anything in the world that existed by that name beside a fictional literary character.  Similar to blueberries, but sweeter, these delicious berries grow throughout the Northwestern United States.  These berries grow in elevations greater than 2,000 feet, and thrive in volcanic mountain soil.  They also make tasty pies, ice creams, and other pastries.

If you like wine, or even just visiting vineyards, there are four distinct regions of wine growing and production in Idaho. These represent three different American Viticultural Areas, or AVA.  These are: the Snake River Valley region, in Caldwell just outside of Boise, the Lewis-Clark Valley region in Northern Idaho, and the Eagle Foothills, a subsection of the Snake River Valley.  There are trails such as the Sunnyslope Trail, the Urban Wine trail of Boise wine tours, and the South Central wine region.  Some favorites from my travels were Williamson Vineyards, Fujishin, and Koenig Vineyards.

One of the most gorgeous and breathtaking areas of the state of Idaho is the Hells Canyon river gorge.  Fun facts about Idaho number five: Located in the Lewis-Clark Valley, Hells Canyon is the deepest river gorge in North America. Not only is Hells Canyon perfect for outdoor recreational activities like rafting, hiking, jet boat and helicopter tours.

The Craters of The Moon

When I was planning our honeymoon, I ran into a roadblock when it came to getting a room at Sun Valley Resort.  Everything was booked.  As someone who lives to plan for vacations, this was crazy to me. I was booking five months in advance!  Sun Valley is known as the first ski resort in the United States and exudes luxury.  When I called to find out why I couldn’t book a room, I was cryptically told there was a conference that week and the entire resort was booked.  It wasn’t until we actually spent time in Idaho when we found out what this conference was.  Every year, investment bank Allen and Company rent out the resort for a week long tech, media, and mogul conference.  Mark Zuckerberg, Bob Iger, Oprah and other attendees spend their week in Ketchum, Idaho, hobnobbing with their peers.

The Country’s Only Year Round Outdoor Ice Skating Rink

One of the other fun facts about Idaho is that Sun Valley Resort in Ketchum is home to the nation’s only year round ice skating rink.  This summer, they hosted a summer skate show that featured professional skaters from all around the world.

The Most Thriving Basque Population Outside of Europe Sure California is home to the largest population of Basque people, but did you know the most densely concentrated Basque population is in Idaho?  Specifically in Boise, there is a whole Basque Block where you can learn about the history of this European subculture, and enjoy their traditions. Basque food, music, architecture, and dancing abound in this stretch of Boise. Finding the most instagrammable places in a city is a very popular activity nowadays.  Sometimes that seems to be the driver of new murals popping up.  When Freak Alley was established in 2002, there was no Instagram, or even Facebook, however.  What began as a space for subculture and graffiti artists to express their work, Freak Alley is now the largest outdoor gallery in the Northwest.  It has grown so large in fact, that this month some of the works are being painted over for fresh updates.

There Are Hundreds More Fun Facts About Idaho: Are you Convinced?

This is just a taste of all the fun facts there are about Idaho.  As one of the least densely populated states in the nation, it is one of the most majestic. But it’s not all mountains and open space.  It also has an incredibly cosmopolitan capital city in Boise.  What are you waiting for? Consider Idaho for your next trip!