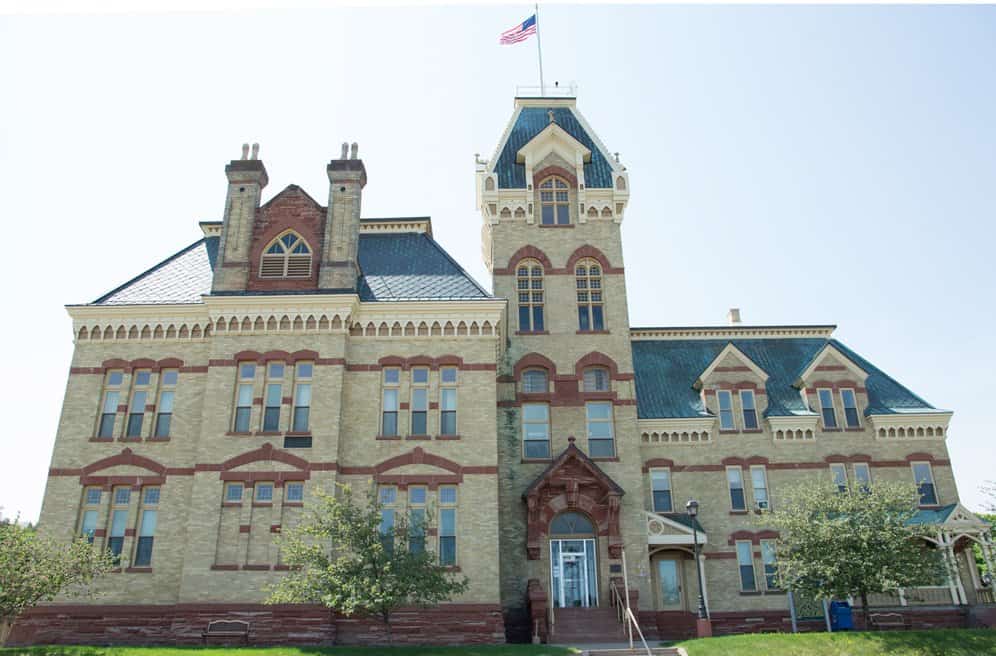 Last Updated on September 20, 2021 by JaimeSays

When my mom and I visited the Porcupine Mountains in Michigan’s Upper Peninsula, we intended to take a few days hiking and enjoying life on Lake Superior.  Then, an accidental five mile detour resulted in lead legs, and we needed a different set of plans.  We decided to get in the car and drive toward some of the larger towns of Michigan’s copper country.  We headed about 55 miles north from Ontonagon: to Houghton, the home of Michigan Technological University, and to Laurium Michigan.

Houghton: My New Favorite UP Town!

I love Houghton, Michigan! You might be thinking, what is there to do in the Keweenaw Peninsula, and with Houghton, you won’t be bored.  It’s historical, has the pleasantries of a modern town, and is it’s just a really awesome town. The rolling hills, the history, and the community of this University town were all amazing.

The main arterial road of Houghton is Shelden Avenue. Each road that intersects or parallels it is populated and has beautifully maintained, historically significant buildings.   It is where the shops, restaurants, and the most fun of Houghton originates. When we first got into town, we parked in one of the free parking lots on the North side of the street, between the Print Shop and the Daily Mining Gazette.  It is clearly marked and allows for easy access to the waterway trail and downtown.  Once we parked, we knew we needed to get some food! The Upper Peninsula of Michigan: Land of the Pasty

The first thing we did once we got to Houghton was to look for a place to eat.  The Upper Peninsula is known for pasties, a beef and root vegetable stuffed ball of dough that Cornish miners brought to the U.P.  A real “stick to your guts” kind of dish, this filling and nutrient filled puffed pastry is a heavy but inexpensive dish.  I ordered the taste portion from Suomi, a Finnish restaurant which was bustling the day we visited.  I received two pasties the size of my fists for just $4.75.  My mom and I sat at the counter of this cafeteria-style restaurant, and enjoyed endless coffee and a filling breakfast.  It was just what we needed before we set out to explore the town of Houghton.

Coming from Illinois, it is remarkable how hilly the Upper Peninsula of Michigan is.  Walking around Houghton, you will get a fair bit of a workout as you navigate the historical buildings of downtown.  Since Suomi was down the hill and closer to the water, we decided to walk down to the water.  The first place we stopped off was one of historical significance as the sight of the first professional hockey game!  While the original arena was torn down, a more modern ice arena sits at the same site. Ice hockey isn’t the only star of winter in Houghton. The Michigan Tech Winter Carnival is a yearly celebration that involves some of the wackiest winter competition! Along the Houghton Waterfront

Dee Stadium sits right along the Portage Waterway, a slice of Lake Superior cutting across the Upper Peninsula. Looking North, the grassy slopes of Mont Ripley Ski Arena are right across the water.  Quincy Mine is a terrific way to learn about the copper mining of yesteryear.  Located in Hancock, the town just north of Houghton, this site provides tours of the historical mine.  Here you can learn about what a typical day in the life of a miner might have been like, and what kind of impact copper mining had on the region.

Looking down the waterway, it is impossible not to be taken with the sight of the Portage Canal Lift bridge.  Operating similar to an elevator, the entire middle lifts when large boats cross through.  Even with Chicago as a city with bridges, this was a first for me.  A modern marvel of engineering sitting in the midst of a town built on the spoils of the past provides quite the scene.

The Riches of The Copper Era

After our walk along the water, we headed back up the hill and back onto Shelden Avenue.  Walking along the street, we found ourselves constantly cocking our heads up to look at the old buildings. Lucky for us, every building states what year it was built on a plaque. This includes gems such as the Houghton National Bank and Mueller House.  Historical marker signs appear on nearly every block, detailing the history of a particular building or era in Houghton. With so much history, you can find it easy to get lost in time in Houghton Michigan. Walking down Shelden, even amongst all the history, there was one building that caught our eye.  It was magnificent, with decorative molding, symmetry, and towers, all in the Italian Renaissance style.  Upon approaching, we discovered that the building is known as Douglas House.  While today it is a private apartment building, it does have a public bar on the ground floor, known as Armando’s.

Armando’s at the Douglas House Saloon

We sat down at the bar to get some iced tea and cold drinks as the UP was in the midst of a 90ºF heatwave! Lucky for us, we were the only people in the establishment and could take photos and speak with the servers. With a plentiful menu of American fare, the Armando’s at the Douglas House Saloon is one of Houghton’s most beloved watering holes.  We also had a chance to try to some Petoskey Wine Region wine, right from Michigan!

The Douglas House opened in 1859. With the growth of the region, it served the numerous travelers from Sault Ste. Marie who were taking advantage of the newly opened Portage Waterway.  It gained a reputation as a world class fine dining establishment attached to an opulent hotel, and Chicago architect H.L. Ottenheimer was commissioned to design a saloon. Original Tiffany chandeliers and an arched ceiling remain today, despite a fire that damaged much of the original hotel.

Sitting on the highest point of town is the Houghton County Courthouse.  Until 1861, the Keweenaw Peninsula was only one county, and that was Houghton County.  With Michigan producing  88% of the nation’s copper, the peninsula grew and was split into Keweenaw and Houghton counties.  Built in 1886, the courthouse’s limestone, red sandstone, and copper roof all come together to elucidate the richness of the copper boom. After the steep climbs up and down the hill from the courthouse, it was after 3 o’clock.  This meant that the Keweenaw Brewing Company was open for business.  One of the most prevalent craft breweries in the Upper Peninsula, popular brews such as Pick-Axe Blonde Ale and Widowmaker Black Ale are always available, and seasonal options rotate.  We found Keweenaw Brewing Company beers canned in most stores and restaurants we visited in the UP. On the day we visited, we elected to have the Up Wit Beer, a perfect summer wheat brew. At $3/pint, I could have had three glasses, but as I was driving, I only had a taster pour.

Houghton, MI : A Great Place to Stop in the Keweenaw Peninsula

If you find yourself in the Keweenaw Peninsula, be it on your way to Copper Harbor or on a longer trip around, you must stop in Houghton, Michigan.  With the university so close, ski hills aplenty, and the Keweenaw waterway, there is plenty to do.  You can stay in chain hotels in Houghton or Hoxton, or give the excellent bed and breakfasts of Laurium Michigan a try.