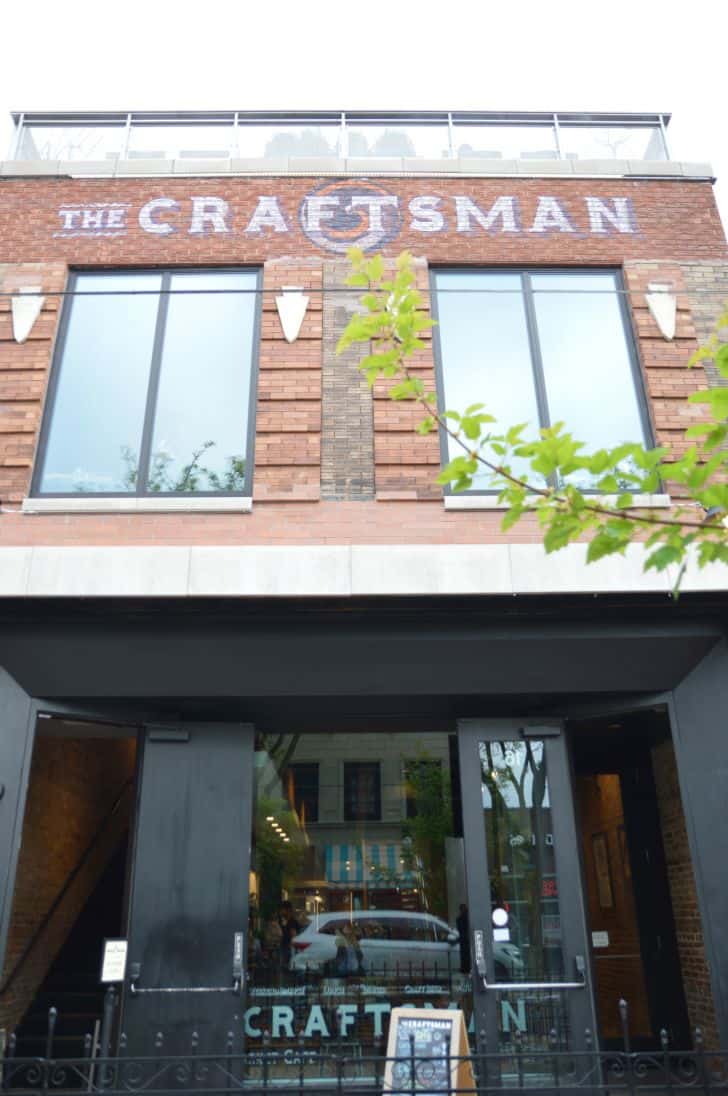 Update: The Craftsman by Two Brothers has closed. Two Brothers will be unveiling a new restaurant and bar concept in the space later in 2019.

I’m a firm believer that obstacles and delays are put in our way in order to reveal what God really has planned for us. Sometimes, these are big things such as a delayed job promotion or an unexpected breakup, but sometimes they are minutely insignificant. Sometimes, it’s something as small as forgetting to respond to an email. When The Craftsman by Two Brothers reached out to me to invite me to try their restaurant in Naperville, I quickly knocked off a return email…that remained in my iPhone drafts for a week before I realized never sent it. A dinner in early April quickly became a dinner in mid-May and boy, did the delay serve us well. You see, The Craftsmen put out a new Two Brothers menu the night of our visit.

“Honey, we’re Going to one of those Downtown Naperville Restaurants!”

When I mentioned that we were going to explore some downtown Naperville restaurants, my husband rolled his eyes. Having lived in Chicago for over ten years, we have a plethora of delicious options for hundreds of different cuisines within a six-mile radius. Why did we need to drive all the way out to downtown Naperville restaurants? I reminded him that my favorite places for high tea in DuPage county were both delicious and more affordable than the city options.

When I told him we were heading The Craftsman by Two Brothers, he rolled his eyes again. After a bust of a day looking at potential homes with our realtor, he wanted a good meal, not bar food. “Bar food for Saturday night?” he said. “I don’t need to drive to Naperville for Two Brothers pizza bites and tater tots,” he pushed back. Then I told him that The Craftsman by Two Brothers menu was not bar food. In fact, it was gourmet offerings. A foodie place, if you will. At that, he skeptically agreed and we made our way out to the downtown Naperville restaurants.

Parking for The Craftsman by Two Brothers

There are multiple free parking garages in Naperville but I typically stick to the Chicago Avenue garage. From there, we walked just two blocks down to The Craftsman by Two Brothers. Approaching the restaurant, I was somewhat confused. The large glass windows revealed a large, bright coffee shop sitting at the base of a modern staircase. Did I miss something? Two Brothers Beer makes coffee? What else to they make? Is there Two Brothers Pizza? Two Brothers bakeware? How many pots do these two brothers have their hands in?

“Is There a Restaurant in this Coffee Shop?”

Walking through the door, the smell of coffee sends a rush of nostalgia to my hippocampus and memories flood in. Mornings with my grandma, sitting in the kitchen sipping on cream packets as she clutched her steaming blue mugs. We approached the barista. “Excuse me, is there a restaurant in here?” He explained that there was indeed, a restaurant on the second floor, a speakeasy on the third floor, and this coffee shop on the ground floor.

The Craftsman by Two Brothers Menu

After a bit of time exploring the coffee shop, we made our way up the stairs and to the restaurant. At the top of the stairs we were greeted by the bustle of the kitchen.  The hostess informed us that The Craftsman had a new chef and had released a new Two Brothers menu that night.

The space was modern and spacious.  There were large, picnic-style tables that could be used for big groups or communal seating. There were standard chairs and booths with ample space between tables.  My husband and I remarked that the tables weren’t cramped and we appreciated that we weren’t on top of other diners.  While the music was audible, we certainly weren’t shouting to hear each other.

The Craftsman by Two Brothers: What We Ate

We started with the house-made sausage on a bed of shaved fennel and red wine tomato sauce.  You know what I hate about sausage? The gross casing that you have to gnash through to get to the meat.  Not here! The sausage had no casing, with mild flavor that wasn’t weighed down by over-salting.  The pickled fennel was also mild and reminded me of a tamer version of sauerkraut; perfect for someone who is hesitant about fermented foods.  A menu item that was brand new the night we visited also happened to be our favorite of the night: the Korean style fried chicken thighs.  They were juicy with just the right amount of heat, umami, and crunch.  The crispy outside wasn’t overly battered, and in actuality, it reminded us of a certain Lincoln Park fried chicken establishment, but better.

My husband had a NY strip steak with two crab cakes as his main, and I opted for the short ribs over polenta and broccoli rabe. First off, the portions are quite large, so each meal was enough to take a little bit home for breakfast the next morning.  Secondly, they were both just so dang good.  The short rib was so tender that I almost thought about eating it with a spoon, and my husband’s dish was so good that he had to skip dessert. Luckily, I had room for the strawberry mango cobbler with blood orange ice cream. I ate the whole thing.

Head Upstairs for a After Dinner Drinks on the Rooftop After dinner, we headed upstairs to the third floor of The Craftsman.  Aptly named “The Third Floor,” this speakeasy focused on local distilleries and, of course, Two Brothers beer.  Meant as a gathering place for friends, there are no tvs anywhere in the bar (or in the building).   The music was loud enough to enjoy, but again, no one had to shout to hear a companion.  I was driving back to the city that night, so unfortunately I couldn’t partake in the beverages, but boy, was there a good looking gin cocktail or two on the Two Brothers menu. It’s been a little while since I’ve tried downtown Naperville restaurants, but the food, design, and layout of The Craftsman by Two Brothers absolutely blew me away.  My husband was astonished by both the high quality of the menu and the sophistication of a suburban space.  We highly recommend a visit to The Craftsman by Two Brothers on your next search for downtown Naperville restaurants.

Many thanks to Two Brothers for hosting our dinner. As always, all opinions are my own.