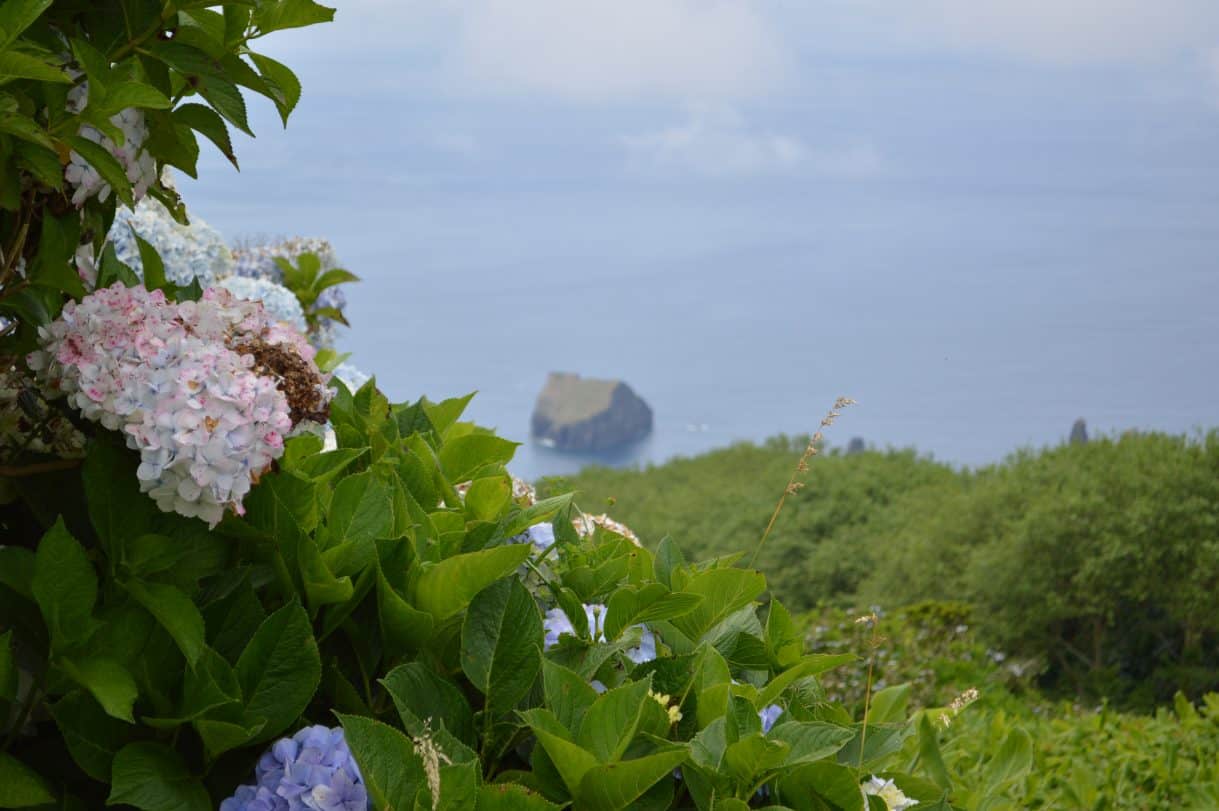 For the next four-and-a-half hours, I am traveling away from Boston on a plane full of tiny, Portuguese women. I am headed to a group of European islands that neither my friends, my family, nor my colleagues know exist: the Azores. I don’t even know exactly what are things to do in Azores.  At 5’3″, I don’t block many views, but with the number of times I’ve helped lift luggage into the overhead bins, I’m feeling a little like  Blake Griffin and post-50, yoga-armed Madonna. I try to make conversation with one woman next to me and it is clear she only speaks Portuguese. I smile at her and pull out my inflight magazine, looking forward to waking up in the exotic landscape of The Azores.

Roughly 60 % of visitors to the Azores come from Portugal and Germany, meaning even with 28 flights arriving each Tuesday, the line for non-EU passport holders moves quickly. Upon exiting the secure area of the airport, a large crowd waited in the lobby. Wrought with nervous excitement and anticipation, every so often an uproar of cheers and clapping would erupt as another countryman returned home. According to Maria, the front desk personnel in charge of our Aeroport Transfer bus, this is a usual occurrence.

“It’s always the flights from the U.S. and Canada. These people left the Azores 50 years ago for work and this is their first trip back,” she says.

The History of Azoreans in North America

Inquiring further, I find out that a devastating volcano erupted on the island of Faial in 1958, displacing thousands and obliterating the island’s economy. As an act of fellowship, then-Senator John F. Kennedy championed the Azorean Refugee Act, a congressional measure that brought some 6,000 Azorean people to the United States with a state sponsored one-way plane ticket. Since these people had lost everything in the volcano or its aftermath, the funds for a return trip home took decades to materialize.

My hotel is no more than a seven minute tram trip from the airport.  With every turn, I am convinced this miniature bus is going to hop a curb and send me flying. Is successfully navigating tiny roads one of the things to do in the Azores? I am relieved when the driver elects to drop me off in the roundabout at the end of the street rather than squeeze his way to the entrance. A former school, the Hotel do Colegio is now a haven for visitors. I am surprised with an open air pool in the middle of the ground floor. Swimming in the middle of my hotel is added to my things to do in the Azores.  I’m much too early for check in, so I set off to make sure I am one of the first people to get to the Ilheu de Vila Franco do Campo. With a daily cap of 400 visitors, I’m not willing to miss out on this volcanic reef sanctuary found little more than half a kilometer from the island coast. Things to do in Azores: Ilheu de Vila Franco  do Campo or “Cliff Diving”

What is now a quick 25 minute drive on the highway never used to be such a simple task. This stretch of pavement didn’t exist until 2011, something hard to imagine for the average, urban-dwelling American. Weaving through pineapple plantations, crossing over gorges hundreds of feet below, I arrive. In front of me is a pier with 75 people waiting in line to get to the islet.  Ten minutes and 5 euro later, I am waist-deep in a protected reef. Surprisingly warm Atlantic ocean is lapping at my torso and red snapper swimming past my knees.  This is one of the things to do in Azores if you are spending three days in the Azores.

This shallow, clear reef is hard to come by in the Azores. Sitting on a volcanic plateau, the Azores formed as a point of contact between the Eurasian, North American, and African continental plates.  Less than a kilometer off the coast, the depth of the ocean is over 1000 meters deep, meaning no reefs or fish are visible to the casual swimmer.  As it happens, it’s hard to see anything below the surface out here.

Things to do in Azores: Swimming with Dolphins in The Azores

On our excursion with Picos de Aventura,  I volunteered to be the first to try swimming with the dolphins. This was not posing in a pool with a dolphin and a trainer; this was trying to catch up to a pod of wild dolphins long enough to join them in the water.  It is one of the incredibly unique things to do in Azores. We spent 45 minutes trying to find these elusive creatures and as soon as we caught up to them, they’d dive deep below the surface and be lost to the sea.  After 2 hours of chasing this cat and mouse game, it was time for lunch.

The Azores, According to the Portuguese

We find dry land and introduce ourselves.  My husband and I are the only Americans; there are three visitors from mainland Portugal, the two English friends we met earlier, and a woman from Hong Kong.  We’ve all come to this island paradise with fun things to do in Azores.  My enjoyment and the beauty of the island overwhelm me, so I ask the Portuguese visitors how often they come.

“It’s our first time here,” they all say.  “I’m almost ashamed to admit that,” Jorge continues. Although he was raised in Portugal, he moved to London for work and has been there for over ten years.

“Whenever we travel, we want to go somewhere exotic, somewhere international.  The last thing I want to do is stay in Portugal.  I’ve never even thought to come here, my parents have never even been here.  I can’t wait to tell them about it.”

Brazil, According to the Portuguese

I probe further and inquire about whether they considered going to Brazil for the summer Olympics.

“She says her mother would never allow it, “Jorge translates for the mother-daughter pair from the mainland. “She thinks Brazil is dirty and full of scoundrels. I’ve got to agree with her there, ” he says, speaking for himself. “When you’re from Portugal, you hear a lot about how unsafe and unkempt it is in Brazil. It’s not somewhere desirous.”

I’m surprised by this candid discourse.  It sounds so…American.  After learning that most of the group has been on the island at least a week, I ask what their favorite part has been. Unequivocally, each group answers that it is the hot springs at Furnas.   I’m ecstatic, as this is next up on our itinerary.

 ”Cheaper than Iceland, and With More Hot Springs” Things to do in Azores

When we first arrive, we walk through a densely manicured garden and stumble upon a circular, olympic-sized orange pool.  Full of 105°F iron rich water, groups of children are careening themselves off of a concrete block into the deep water head first.  Andy, our tour guide, sees us approach and waves us down.

“I hope you didn’t wear anything you don’t mind staining orange!” Andy exclaims. He points to yellow palm trees on his swim shorts.  “These used to be white.”

Our day with Andy proves to be educational and entertaining.  A former Captain of the British Royal Navy, Andy traveled around the world most of his life and made his home in The Azores.

“The Portuguese people were the most pleasant I’d ever met, and the diving is top notch, ” he explains.

He tells us about the affordable real estate on the islands and informs us of the 18- month growth cycle of the intensely sweet Azorean pineapple.  He shows us the best lookout points on the island, and spends the last day relaxing with us in the hot springs.

Overheating in the Azorean Hot Springs: One of the Things to do in Azores that Spoiled the Day

While he and my companion wade easily through the water, at nearly one and a half meters deep the pool covers my body up to my neck.  With no cool air to provide relief, I feel my body temperature rising uncomfortably and seek refuge on the side of the pool.  I am light-headed and unsteady, irked by my body’s timorous response to a sulfuric jacuzzi.  After 15 minutes without stabilizing, I wave the white flag on our day at the hot springs. Despite it being one of the very popular things to do in Azores, I wasn’t feeling it. I spend my final afternoon walking through another beautiful botanic garden, lost in the beauty of the tropical landscape. With my fingers only temporarily dyed orange from our dip in the springs, my memories of this magical island will last much longer than any stain.

A Final Tip for Visiting the Azores 

Before heading to the Azores, I hadn’t a clue what to expect.  What were things to do in Azores and what could I expect?  In the end, I decided to arrange most of our trip through a tour operator. As the only English speaking agency that I could find, Azores Connections was the clear choice for arrangements.  Andy and Laura communicated with me via email for five months before our trip, and customized everything to our tastes.  I am so grateful for their help, and recommend contacting them for information regarding a trip.  More information is available at www.azoresconnections.co.uk or you can reach Andy by email at andy@azoresconnections.co.uk.

Have you heard the news that @sitkasalmonshares is

Only 1 month old but he already has some pretty st

If you had thought that I wasn’t posting much wi

This website uses cookies to improve your experience while you navigate through the website. Out of these, the cookies that are categorized as necessary are stored on your browser as they are essential for the working of basic functionalities of the website. We also use third-party cookies that help us analyze and understand how you use this website. These cookies will be stored in your browser only with your consent. You also have the option to opt-out of these cookies. But opting out of some of these cookies may affect your browsing experience.
Necessary Always Enabled
Necessary cookies are absolutely essential for the website to function properly. This category only includes cookies that ensures basic functionalities and security features of the website. These cookies do not store any personal information.
Non-necessary
Any cookies that may not be particularly necessary for the website to function and is used specifically to collect user personal data via analytics, ads, other embedded contents are termed as non-necessary cookies. It is mandatory to procure user consent prior to running these cookies on your website.
SAVE & ACCEPT
Have you heard the news that @sitkasalmonshares is

Only 1 month old but he already has some pretty st

If you had thought that I wasn’t posting much wi