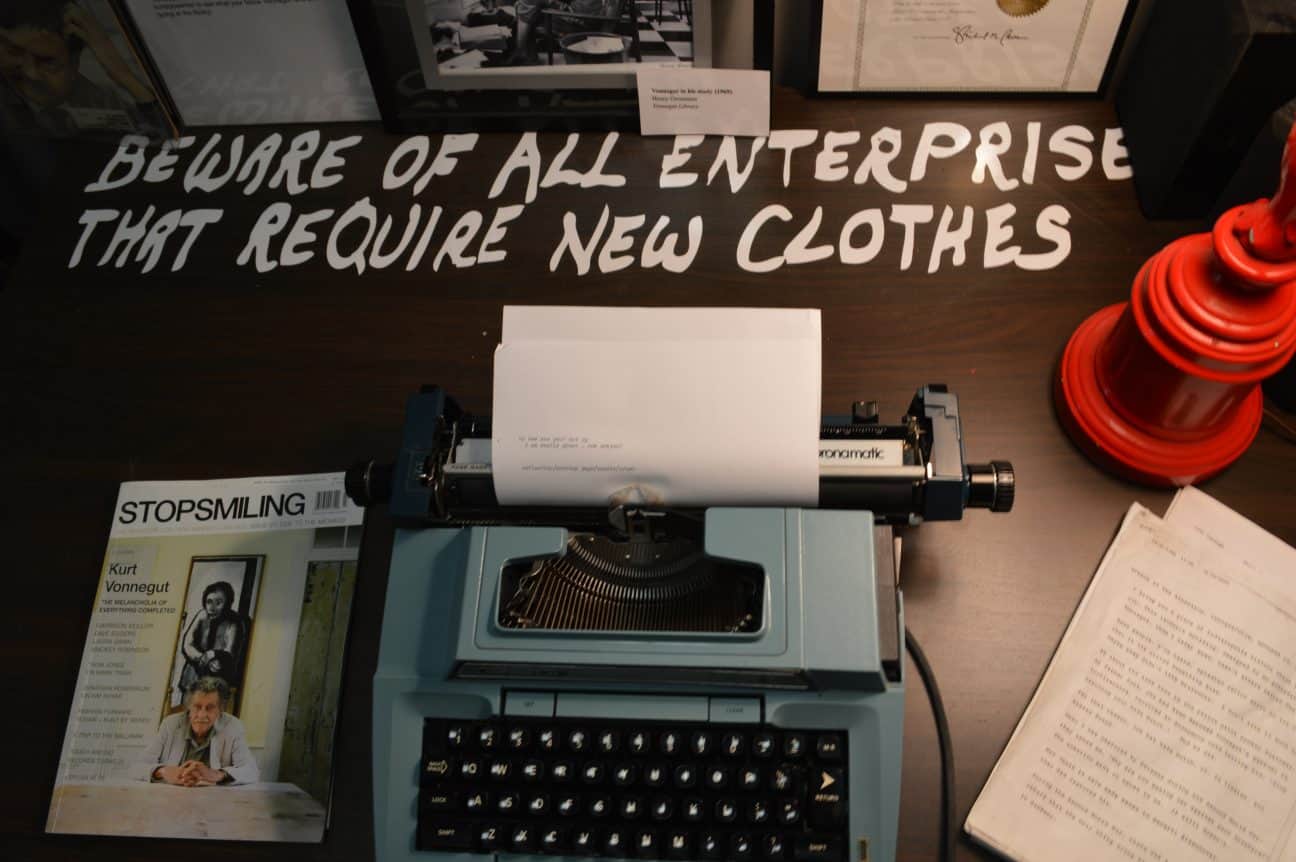 According to England’s tourism board, 2017 is the “Year of Literary Heroes.”  For those of us living in Chicago, there are many accessible literary heroes in our backyard. A trip to the Back of the Yards neighborhood would honor Upton Sinclair’s courageous journalism at the turn of the century.  In Humboldt Park, you could take a walk down the boulevard and wonder what Sandra Cisneros harkened to when writing The House on Mango Street.  For anyone looking to have a more immersive experience out of town, experience 2017 with Indianapolis’ “Year of Vonnegut.”

I can remember when I first encountered Kurt Vonnegut.  My high school American literature seminar required reading from a selected list of contemporary writers.  Where others reached for The Electric Kool-Aid Acid Test, I ended up with Cat’s Cradle.

It was 2002 and people were just starting to get cell phones.  Not glued-to-your-hand cell phones, but the kind that you were required to have if you were leaving the house. Attention spans hadn’t yet declined to the frightening lows of today, and forward head posture hadn’t been coined.  I would devour the book, reading about the ineptitude of the characters doing all the wrong things in an effort to be loved; it was very familiar for a high school student.  The tenuous line where technology straddles both helpful and dangerous was, to a 16-year-old, anything but opaque.

If you are like me, you may be surprised by a library dedicated to this contemporary American author.  Prior to speaking with the Indianapolis tourism board, I did not know such a place existed. Opened in 2011, the Vonnegut Library celebrates the life and work of contemporary American writer Kurt Vonnegut.  An Indiana native, Vonnegut’s family of businessmen and architects left their mark on the physical structure of Indianapolis.  Kurt’s satire and wit, however, left the most intangible impression.  As it so happened, I discovered this museum and library at a perfect time.  In 2017, Indianapolis will celebrate, “The Year of Vonnegut.”

The Year of Vonnegut Calendar

The “Year of Vonnegut” will mark the ten-year anniversary of the death of the great writer. Scheduled to give a speech to Butler University graduates in 2007, the author’s great return to Indianapolis was never to be.  He died two weeks before the commencement ceremonies. It is fitting then, that the city honors his life and work as a means to celebrate the relationship between the writer and his nascent city.

Indianapolis has activities celebrating Vonnegut the entire year, so whether you find yourself there in January or July, there is something for you. Restaurants, museums and artwork will pay homage to the author, and there will be other special events as well. The following schedule is current as of this publication, please see the official Vonnegut Library website for updates.

Monthly Activities for the Year of Vonnegut

December 2017: Discussion on Slaughterhouse-5 in regards to Reconciliation after War (hosted by Hoosier Interfaith Council)

If you find yourself craving a return to common decency, Indianapolis in 2017 will be the place for you.  Perhaps you are just a Vonnegut fan or are interested to learn more about the man. Either way, consider a day trip or weekend in Indianapolis.  Hotels like the the Omni Severin and The Alexander are great options for a stay.   Restaurants like Bluebeard and Amelia’s design their menus around themes of the author’s work. No matter what year it is, it will be hard not to stumble upon the influence of one of America’s greatest modern writers as you make your way around the great city of Indianapolis.

Traveling to Indy?  Check out my post about staying at the Omni Severin in Indianapolis.

Many Thanks to Visit Indy and the Vonnegut Library for hosting my visit. As always, all opinions are my own.