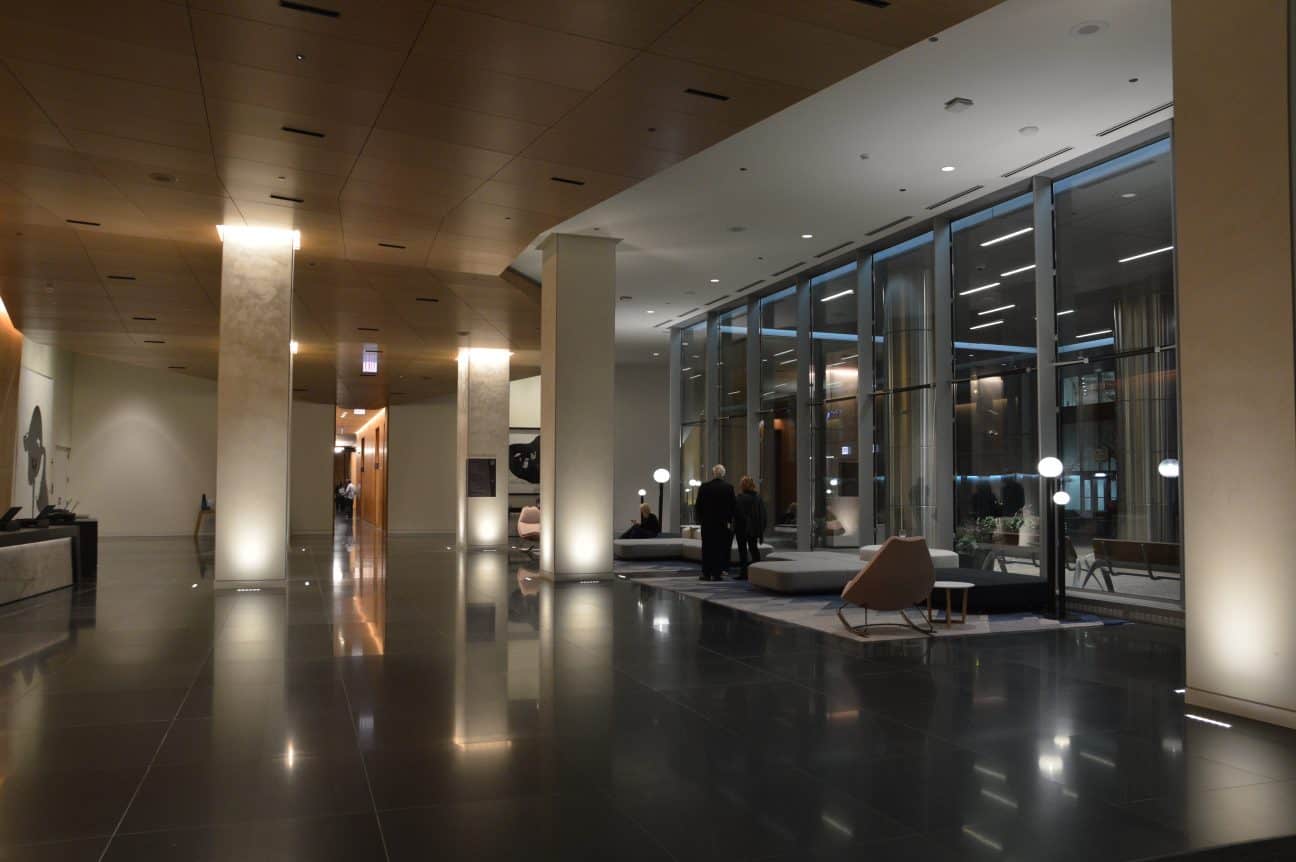 Being a major United States city and airline hub, Chicago hosts many conventions.  Many of the larger gatherings occur in the near South side of the city, at the McCormick Place Convention Center.  For years, there was only one hotel option within walking distance of McCormick Place.  Not anymore.  With an official opening date of November 16, 2017, the newest Chicago hotel near McCormick Place is the Marriot Marquis Chicago. The Marriott Marquis: A Chicago Hotel Near McCormick Place, but How Near? The Marriott Marquis is located at 2121 South Prairie Avenue in Chicago’s South Loop or newly dubbed McCormick Square neighborhood. It is a mere 0.4 miles from McCormick Place.  The building itself is 40 floors high, with rooms as high as the 39th floor.  It is the seventh Marquis of the Marriott brand with other U.S. locations in Atlanta, New York, San Francisco, San Diego, Washington D.C., and Houston.

What’s Different About the Marquis Brand?

The Marquis brand acts a flagship for Marriott.  With grander buildings and loads of rooms, the largesse of these Marquis properties makes quite an impression.  While the Marriott Marquis in Chicago is an ideal hotel near McCormick Place for a homebase, it also can serve as an convention location on its own.  With 93,000 square feet of meeting space, this hotel near McCormick Place is ideal for meetings.

The food and beverage offerings at the Marriott Marquis Chicago are top notch. With the Marquis brand, Marriott elevates the food and beverage scene.  Currently, there are two eateries open at the Marriott Marquis Chicago. The first, Pantry 2121, is a quick and convenient takeaway stand that offers readymade sandwiches and bites.  Woven and Bound is a foodies delight with seasonal menu items and an extensive drink list. Cocktails, craft beers, and a decent wine list round out the exceptional menu.  Here are photos of the menus from October 2017 during the soft opening of the restaurant and hotel: A Delicious Dinner at Woven and Bound

My fiancé and I were lucky enough to enjoy dinner at Woven and Bound a few Tuesday nights ago.  The cocktail list is such a temptress, but neither Eddie nor I drink during the week. We were super hungry by the time we sat down so we ordered two appetizers: the duck pâté crostini and the grilled pear salad.  The duck pâté was really thick cut and came with a tomato onion remoulade. It was a firm texture, not like a mousse, and not heavily salted.  There were three fist sized pieces so we had plenty to share. The duck pâté crostini at Woven and Bound.

The grilled pear salad came out at the same time as thepâté.  With watermelon radish and zingy microgreens, the creaminess of the burrata with the savory chestnuts and smoky pear all melded together nicely.

A Surprise from the Chef

Was I surprised when Chef Josh Murray stopped at our table to say hi!  As the former head chef at the Renaissance in Phoenix, he knows what Chicagoans like to eat. For those of you who don’t know, the Phoenix area is a winter mecca for Chicagoans.  He let us know that all of the ingredients and foods at Woven and Bound are from the Midwest as much as possible.  Ingredients are from from farms that use sustainable farming practices.  Meats on the menu are dry aged from corn fed cows, giving the meat the additional marbling and flavor not seen in grass fed beef.

As an extra treat, Chef Murray sent out a tasting portion of the newest dish on the menu: braised rabbit pappardelle.  Pappardelle is my favorite type of pasta and I haven’t found a rabbit dish I don’t like.  This was a boozy, Koval bourbon braised rabbit along with earthy shitaake mushrooms. The pasta tasted of nutmeg, citrus, and all kinds of perfect for fall.  I gobbled it up and completely forgot about my carbohydrate limited diet in preparation for our upcoming nuptials. My favorite dish from Woven and Bound: Rabbit Parpadelle.

For our mains, my fiancé ordered the amish chicken and I ordered the Vice District burger. Vice District is a microbrewery located right in the South Loop. I love burgers, and anything with an egg on top has my vote. Look how delicious the egg looks atop that burger!

As I have been avoiding carbs, I opted to skip the bun despite the perfect look of it.  Eddie said it was terrific. Now, when I say this burger was the gift that kept on giving, I am not exaggerating. First, it was the yolk of the egg dribbling down the side of the patty and nestling into the folds of the lettuce.  Then it was the burger itself, chargrilled medium well with gooey cheese oozing between every bite. And then the texture of a thick cut pork pâté giving a little bit of chew in each bite.  I won’t forget the creamy, cool avocado, and the spicy house made pickles that added the ideal vinegary heat. Eddie had the Miller’s Amish Chicken.  It was symmetrically plated and evenly cooked throughout.  The chicken was moist and flavorful with an added bonus of having a bone-in to keep it extra juicy.  The braised white beans were creamy and the delightful smattering of dried cranberry hitting the palate was a sweet surprise.  The parsley added a touch of vegetal flavor to cut the fat of the chicken skin and starchiness of the beans.  I normally don’t like to order chicken when I’m out, but dang, this was so flavorful that I’d eat it again.

The dinner we ate at Woven and Bound was remarkable.  When looking for a place to eat, I certainly recommend this restaurant in a hotel near McCormick Place. The tall ceilings and open concept felt uncrowded even as the bar was packed with conventioneers. TVs on the back of the bar made sure that we didn’t miss a beat of playoff baseball, something that made Eddie and I both pretty pleased. Seating in the Restaurant of Woven and Bound. Basketball and Baseball on the Screens at Woven and Bound.

What’s in a Name?

Woven and Bound is an homage to the Printers’ Row neighborhood.  While the neighborhood is currently about 12 blocks north on Dearborn Avenue, its original location was right here on Prairie Avenue.  I’ve mentioned that major printing and manufacturing giants lived and worked on Prairie Avenue at the turn of the century.  When the construction of the Marriott Marquis began, questions arose about what would happen with the American Book Publishing building.  Built in 1912, the red brick facade in a classical form is a neighborhood stalwart. Marriott decided to incorporate the building into construction of the Marquis and thus linked the past with the future. Today, as part of this Chicago hotel near McCormick Place, the building serves as 29 meeting rooms named for subjects of textbooks originally published there. Even the wallpaper in the rooms honors the building as it is made from the pages of old textbooks.

A new dining option is coming to the Marriott Marquis Chicago soon. Market is scheduled to open in January 2018.  It will have an entrance built directly from the street, so no need to enter through the lobby. Modeled off of Revival Food Hall, it will have five or six mini-restaurant concepts within the space.  Hopefully it will be open later than Revival as I’ve not yet had a chance to get there since I work in the suburbs and it closes at 7 pm.

If you are needing a hotel near McCormick Place, you shouldn’t have an issue with finding one of the 1205 rooms available at the Marriott Marquis. Hotel rooms extend as high up as the 39th floor. Found out about my stay on a 26th floor executive suite here. There are 44 suites and two presidential suites available. The standard room measures 420 square feet and is the design work of Gensler.  Each room includes a safe for valuables and an empty fridge to keep any leftovers from a night out.  There are also safety protocols in place to make sure you are safe in your room.  Elevators require keycard access to get to any of the rooms, and I personally encountered a security guard who wanted to verify my presence on a restricted floor. Safety is a major indicator when picking a hotel for anyone, particularly for a hotel near McCormick Place. West Elm furniture decorates the rooms of the Marriott Marquis. Additional seating in the form of a chaise lounge, a loveseat, and a desk with chair in a standard room.

Rooms are decorated with Chicago photography, and include coffee makers. Plenty of counter space in the bathroom. On the 33rd floor of the building, there is also a private event space of 3,600 square feet.  It has north and south facing views of the city and you can even see into Soldier Field.  Speaking of arenas, the Marriott Marquis Chicago attaches via pedestrian skybridge to the newest arena in Chicago.  The Wintrust Arena at 200 E. Cermak Road is home to the DePaul Blue Demons basketball team. When DePaul basketball is not in season, it serves as a major concert hall for the neighborhood.

Consider Staying at the Newest Hotel Near McCormick Place

The design and sleekness of the building and public spaces in the Chicago Marriott Marquis drew me in. The tour of the rooms revealed that those same characteristics also apply to the individual rooms.  The food offerings are top notch and the cocktail list is a sight to behold.  In addition, the Marriot Marquis built a brand new park for the neighborhood kids and families. As a hotel near McCormick Place and the South Loop, the Marriot Marquis Chicago ultimately is a place I would recommend to my friends and family.

Many thanks to Marriott Marquis Chicago and Woven and Bound for hosting me. As always, all opinions are my own.