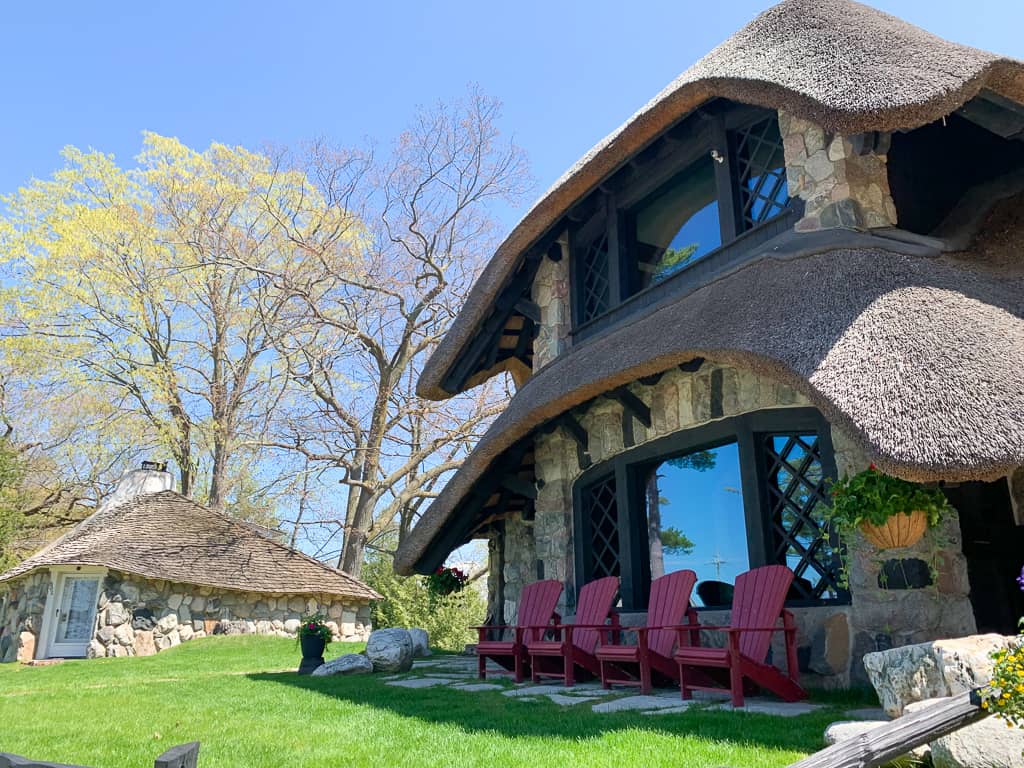 When you think of distinctive Midwest architecture movements, Frank Lloyd Wright’s Prairie Style will most likely come to mind. His work spanned the globe and changed the world of architecture. You may not know there was another Midwest architect who also created a distinctly unique style of architecture called mushroom houses. Earl Young, a true innovator and one-of-a-kind, built these mushroom houses starting in 1919. Although in-demand and requested all over the world, he refused to build his mushroom houses anywhere but in his hometown of Charlevoix, Michigan.

Who Was Earl Young?

Earl Young grew up not far from Charlevoix, in a town called Mancelona. As a boy, he collected rocks from the banks of Lake Michigan and Lake Charlevoix, as many people in the area do. He showed an interest in architecture and Frank Lloyd Wright early in life, and enrolled in University of Michigan architecture school. Unmoved by the linearity of formal architecture, he dropped out after a year. He tried his hand at realty and began selling houses, and actually held onto his realtor license for nearly his whole life. The more he spent time selling houses, the more he wanted to design them. So he did. Over time, these distinct homes have come to be known as the mushroom houses.

An Architect with No Blueprints

The aspect of design that Young loved was Frank Lloyd Wright’s idea that the house should fit into the landscape. FLW would design homes around trees and existing topography in order not to disrupt nature. Young wanted his homes to do the same, specifically in Charlevoix. He decided he would pull stones and boulders from the lake in order to bring the beauty of the underwater world, into plain view.

Without the proper training, Young bypassed blueprints in favor of sketching a design in dirt with a stick. His contractors would have to work from there. Known to be somewhat unpredictable, some of his work even reflected his feelings toward neighbors.

A Vision for a Private Residence Club of Mushroom Houses

When visiting Charlevoix, one will quickly learn that there are a few areas of town that are private resident clubs. These are exclusive and beautiful areas, and quite historic. Earl Young wanted to make his own exclusive private residential club of mushroom houses in Charlevoix. He envisioned “Boulder Park” along the banks of Lake Michigan, an homage to his design and home building.

Earl Young mushroom houses stand out in comparison to the classical style of home built during the architect’s lifetime. As such, Young was inspired to create a section of Charlevoix dedicated only to his buildings. While he certainly had a commanding presence of Charlevoix’s Park Avenue, he wanted something more set away from Charlevoix’s traditional residences. While he did succeed at building a number of homes in this secluded lakeside area, financing issues due to the Great Depression as well as practicality of homes ultimately sunk the idea.

Love Discovering Hidden Architecture Enclaves in Small Town America? Check out the Things to do in Columbus Indiana!

Not to beat a dead horse, but Earl Young mushroom houses were both on trend and very unique. Built during the height of Mid-Century Modern design, the homes integrated seamlessly with nature and the landscape around them. There were however, some distinct markings of the man himself in each of his buildings.

How to See the Mushroom Houses of Charlevoix Michigan

You can certainly participate in a self-guided walking or driving tour of the mushroom houses, but you won’t learn much about them. To get the true history and anecdotal stories about the architect and the families who lived in these houses, I highly recommend booking a tour with Charlevoix local, Edith Pair. Edith runs approximately 60 minute Mushroom House Tours by foot or by multi-passenger GEM car. She is so well informed and brings a charm to the tour that another tour provider couldn’t replicate. You can find all my suggestions for a weekend in Northern Michigan in this post.

Many thanks to Visit Charlevoix and Mushroom House Tours for arranging my research trip for this article. As always, all opinions are my own.