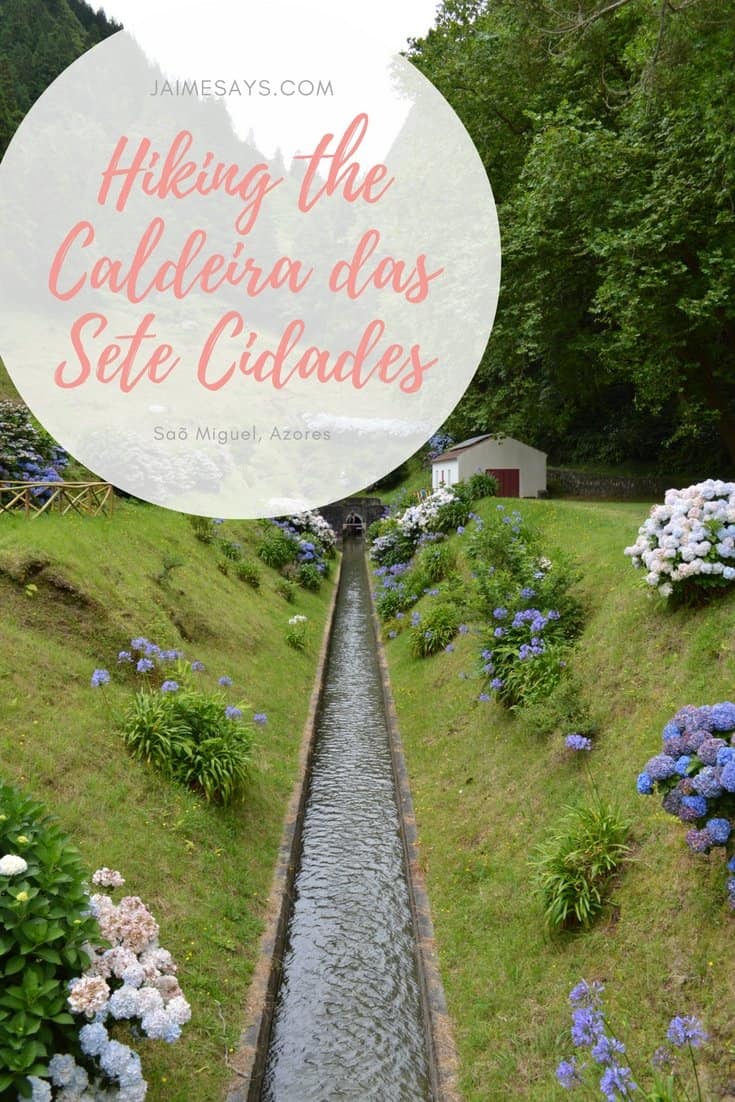 Have you heard of Sete Cidades, Azores?  If you are a backpacker, a hiker, Portuguese, or an adventures seeker, perhaps you have heard of it. You may be thinking to yourself, where is Sete Cidades?   If you are a fan of beautiful lakes, folklore, history, lush greenery, or geology, you’ll want to visit this magical locale. Moreover, if you are a fan of the outdoors, you’ll want to go on a Sete Cidades hike.  While on Sete Cidades hiking trails, you’ll see why the lagoa Sete Cidades is the most photographed and instagrammable place of the Azores. These blue and green lakes are pure magic.  (feature image c/o Michael Laungani)

What is Sete Cidades? Sete Cidades is Portuguese for “Seven Cities.” People who have heard of it know it is “the place with the blue and green lakes.”  It is one of the most beautiful geographical areas on the West side of Saõ Miguel, an island in the Azores. The Caldeira de Sete Cidades is one of the most photogenic areas of the Azores, which is quite a feat for an island archipelago that encompasses beauty at every corner.  A caldeira is a large volcanic crater that forms after volcanic eruptions.  The heat and force of an eruption often causes the mouth of the volcano to fall in on itself, leaving a massive crater in the earth. The collapsed volcanoes that form the caldeira of Sete Cidades are thought to be about 200,000 years old, and one of the older parts of Saõ Miguel. There are two lagoa Sete Cidades, or lakes of Sete Cidades: the lagoa azul and lagoa verde. One lake is green and one lake is blue, thus the names blue and green lakes.  Legend states that an Azorean princess fell in love with a shepherd in the area.  The King did not approve of their romance and forbid his daughter from seeing the shepherd. The tears of the blue-eyed princess and the green-eyed shepherd were so great, they formed two lakes.  In actuality, the green lake is much more shallow than the blue lake. Thus, the green lake reflects the greenery of the land and the algae below while the blue lake is significantly deeper and reflects the blue from the sky.

Views from the drive up to Sete Cidades from Ponta Delgada. Are there Really Seven Cities to Visit?

Sete Cidades Azores has historic and ancient beginnings.  The first mention of the area comes from texts thought to be from between 734-750 AD. Sete Cidades is one historic place! In ancient writings, an archbishop from the European continent set out for the Azores while running from Moorish invaders.  Legend has it that this archbishop and up to 5000 faithful followers landed at Sete Cidades. Here, they established seven parishes under seven different religious leaders. While this is thought to be more legend than fact, nonetheless, the name stuck.

As this area of Saõ Miguel is one of the older parts of the island, the Sete Cidades is described as an island to itself. Historic maps from this time also show this area as an island.  It wasn’t until many years later, in 1427 during the era of exploration, that the island of Saõ Miguel was discovered. By then, the volcanic activity of the area made Sete Cidades part of this larger island. Today, Sete Cidades is a farming community. It is home to around 800 people living on approximately 12 square miles of land around the blue and green lakes. Where is Sete Cidades?

As the bird flies, Sete Cidades is about 10 miles from the main port of Ponta Delgada on Saõ Miguel in the Azores.  By car, the drive is about 17 miles of twisting, pasture lined roads ascending into the mountains.  You’ll see ancient aqueducts and many fields of green. As Sete Cidades is the town deep within the caldeira crater, the first glimpse of the town and its blue and green lakes are from high above.  Known as Vista do Rei, or “The King’s View,” the lookout point is named after a 1901 visit from Portuguese King Carlos I. View of the Lagoa Verde and Lagoa Azul of Sete Cidades from Vista do Rei.

There is also an abandoned five star hotel at the Vista do Rei. This hotel, known as the Monte Palace, was too early, and too expensive, to be successful.  You are free to enter the building, climb the roof at your own risk, and see some of the beauty that once inhabited this space.

From the viewpoint of Vista do Rei, you can drive or hike Sete Cidades. Either way, head back from where you came down to a turn off on the left hand side, about three quarters of a mile down. Eventually, this will take you on a crater lake tour, but gets you to another lookout of the blue and green lakes.   This is another beautiful viewpoint known as Miraduoro do Cerrado das Freiras on the way down to the the lakes. Keep descending the road and again on the left, you will find another gorgeous lookout point on your Sete Cidades Hike. This is known as Miradouro da Lagoa de Santiago.  Here is a beautiful photo of this crater lake near lagoa Sete Cidades. Again, my friend Michael got a gorgeous shot of this lake when he visited with his wife: Continue downhill toward the lagoa azul and lagoa verde of the Sete Cidades hike. Surrounding the blue and green lakes, you’ll notice cows grazing on the cliffs. The Azores are known for their fantastic cheese, wines, and teas.  These relaxed cows feasting on mineral rich grass are doing their part to make this delicious Azorean cheese! The bucolic scenery is much more reminiscent of the French countryside than the subtropical island that it actually is! Looking at the steep incline above, you’ll notice how far you’ve descended on your hike.  At between 1,150-1,300 feet from rim to crater, it’s a fairly moderate Sete Cidades hike.

Cross the bridge that separates the lagoa azul from the lagoa verde and you’ll be in the town.  Once down at lake level, you’ll see that the town of Sete Cidades is relatively quiet.  Follow the same road as the bridge, 9-1 as you hug the shoreline of the blue lake, lagoa azul. As you walk, you’ll notice some boxy, glass buildings sitting along the shore line.  Here you will find tour operators, boat launches, restaurants and tea houses.  I’m also someone who looks for abandoned places near me, and there is a real gem right by the Sete Cidades. We had delicious sodas and sandwiches at Green Love. Photo c/o Skyscraper City.

After a quick bite and stop along the shops of the lake, continue walking just past the shops and you’ll see a gorgeous drainage and irrigation channel.  While normally irrigation channels may not be the most picturesque, Sete Cidades Azores irrigation channel is stunning! You can continue on to Moisteros by bus or by car, or spend the day lazily kayaking on the peaceful waters of the blue and green lakes of lagoa Sete Cidades. A safe place in Europe with few tourists and affordable prices, I highly recommend discovering the Azores with savings up to 20%!