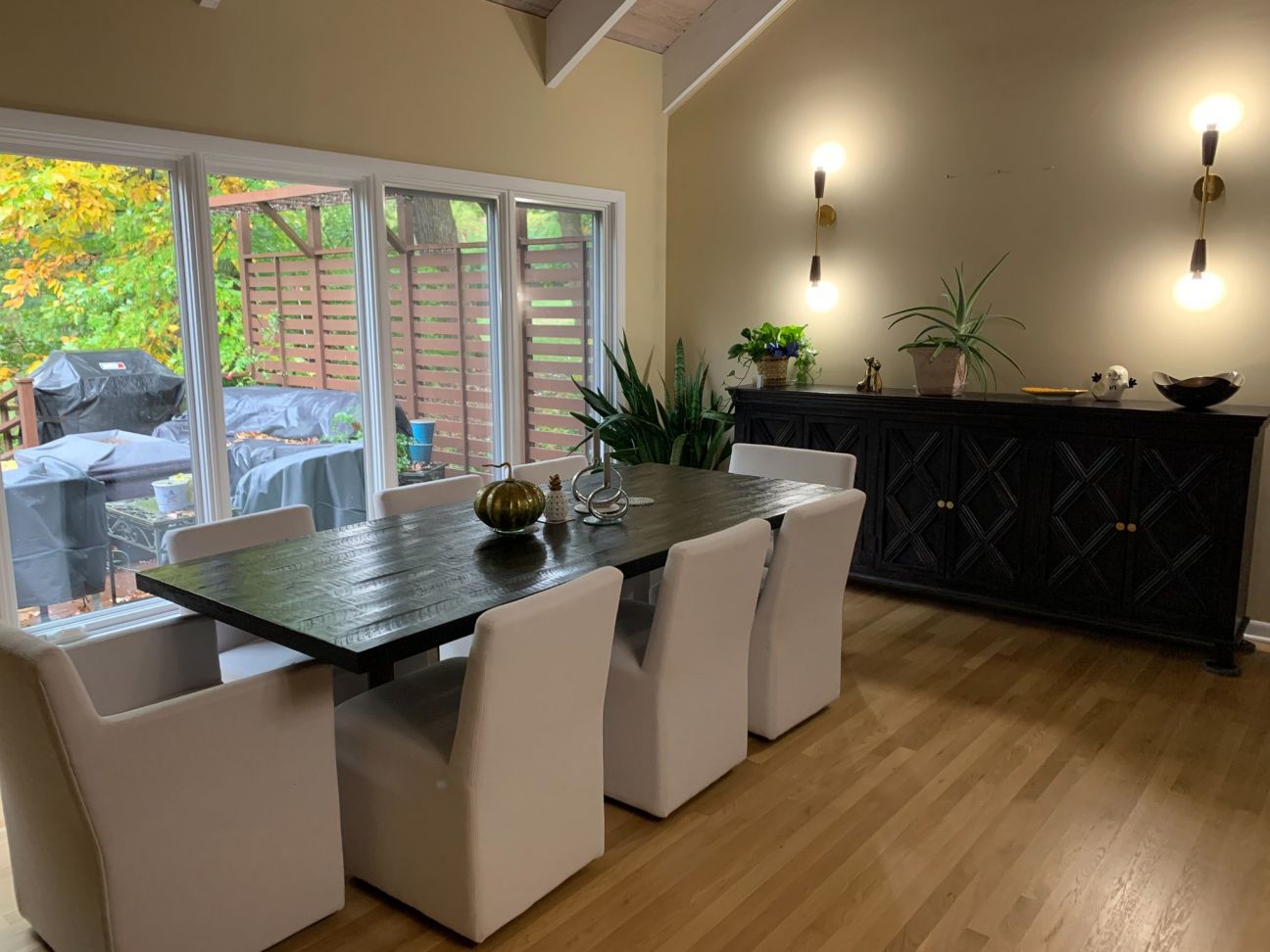 After two years in my home, one of which was intermittently during a lockdown, I realized there were many aspects of our decor that could be optimized. Besides, we had big changes on the horizon! I had been trying to get lighting installed in one of our rooms since the first month we lived in the house, and was constantly second guessing myself. I even went to a lighting design store, had a designer over, and then once I picked a design, he told me I should go home and think it over. Needless to say, it made me question my taste and my vision for the room.

After a false start or two, I spent a few days researching and cross referencing designers, pricing, and reviews on Houzz, Yelp, Facebook Reviews, and Duck Duck Go. I narrowed it down to two different interior designers and reached out to both to check availability and pricing. They both sent over their availability and pricing, along with links to their portfolios via Houzz and Pinterest. I looked each over and ultimately decided on the one that was available first and was slightly more affordable. I had done what was the most important step: I found the person I wanted to hire.

Once I narrowed down the company/person I wanted to hire, the first step involved a phone call. We arranged a time to discuss what I was looking for in an interior designer and the various services she offered. Over the course of our call, she explained to me the three levels of service that she offered. They were as follows:

Because we were not going to be doing any construction, we went with the project based tier of service. There were three areas that I wanted help with: our living room, our dining room, and our office.

The first issue that we ran into was completely out of the control of the interior designer. Thanks to progressive policies and other artificially created supply chain issues, the United States is facing both furniture and labor shortages. This means that certain furniture designed out of country is not making it to the US in a reasonable amount of time, and furniture made in country is taking longer than usual because of material delays or unfilled jobs. What this meant for someone looking to make moves before a tiny human entered the world, was that we would have to find products that were in stock. Spoiler alert: this didn’t actually matter. We received very little furniture before the little guy arrived. This limited some of our options, but also led her to scour resale shops more intently.

Part of the reason I chose this particular interior designer is that she said her strongest area of design and expertise was in lighting. One of the biggest issues that we had in our house was a room with no light. Our formal dining room was dark as can be, and while our bright floor lamps helped, we needed wall sconces with dimmers. Three years ago, the sales person from the lighting store I visited told me I would need at least 6000 lumens of light to brighten the room. I mentioned this to the designer and she stated that 6000 lumens is half the brightness of a stadium light bulb. That would have been offensively bright, even when on a dimmer, so when she directed me in another direction, I was happy to move forward.

She suggested I would need wall five wall sconces installed in order to appropriately light the room. One stand alone, two on one wall, and three above the five-windowed wall to the outside. The set of three lights she picked were amazing. They were from Hudson Valley Lighting and reminded me so much of lighting at Ernest Hemingway’s favorite bar in Petoskey, Michigan. A real Tiffany vibe, if you know what I mean.

When she had totally won me over with her lighting choices, including the ones below, I asked her to recommend an electrician. This is where I was supremely disappointed. She said that because I did not hire her for a full service project, no one she would recommend would be willing to take the job. This is when I knew I hired an interior designer and ended up disappointed. I hired her for her taste and to lessen my time burden, but let me tell you, I wasted a whole bunch of time talking to electricians.

Here’s why: the three Herikimer sconces she made me fall in love with could not be installed in our room.

It turns out that there is a reason why you don’t put lights inches above a window frame. That reason is called a “header.” A header is a wood beam that bears the load of the wall and ceiling above it so that the window below can be open. I scoured NextDoor and Facebook looking for electricians. I called five electricians looking for someone to install or give me a quote in person. Three said it couldn’t be done because of the header. The fourth came out to the house and said it couldn’t be done. The fifth said it could be done, but didn’t have a website, could only speak through an interpreter, and didn’t have more than one recommendation online. The only other person saying it could be done was the interior designer, who swore up and down that her electricians said it could be done. But again, she had them working on a more lucrative job so they couldn’t actually be of any use.

So, while I paid for and had in my possession these gorgeous lights, I could not use them. I begrudgingly had to send them back and pay a restocking fee, which I requested be reimbursed by the designer; she obliged. I also had to have my husband do all the work because by this time I was seven months pregnant and couldn’t lift anything too large. While the other three sconces together are plenty bright to light the room, the extra trouble of having to deal with purchasing, storing, and returning lights we couldn’t use was cumbersome.

Not The Only Issue

While I got over the lighting issue, it wasn’t the only problem we had with this interior designer. Before I had paid her for her design services, but after our initial consultation with consulting fee, she sent me a “get to know you” document. Here she was able to show me different styles of design where I could narrow down my like and dislikes. It was here that she also had me fill out what my project needs were, in order of importance. This is what I sent her:

Number one lighting was done, but didn’t go smoothly. On top of the design issues, because no tradesmen were recommended, the company that did our drywall was not great, and had to come out five times with two different guys to complete the job at a level that has left me not entirely satisfied. Number two was all about the office, and namely, finding a desk for my husband. As mentioned twice in the brief, tendonitis from mouse use (which was misspelled in my brief, oops) was a main factor. We needed a desk that could accommodate four monitors and provide surface area to support his arm up to his elbow. As someone who works in orthopedics by day, this is something I assumed an interior designer with knowledge on ergonomical corporate office design knew. I must have been wrong because this is what she recommended:

At her final presentation, I told her the desk wouldn’t work, simply because the bar between the corner and the additional space would not allow for swing through of an office chair. Both she and her design assistant told me I was wrong and it was an optics issue. Not to bemoan the issue, my husband and I went to a furniture store where I had him sit at this desk. It was all wrong. The bar was a barrier to moving freely at the desk, and he could not have both his arm and a monitor on the desk space.

After we confirmed in person this desk would not work, I emailed her to request additional desk options. She responded that she had used up the funds I had provided for her in her initial design, and it would cost more for her to suggest other options. I responded with the above brief detail, suggesting that she did not meet my requests from my project as I clearly outlined. If I was charged for a project with these three rooms completed, and one was not done as specified in the brief, her time mismanagement was not something I should be charged for. She eventually sent other options without comment or an invoice.

What I Learned and Mistakes You Can Avoid

All in all, about 1/3rd of what I wanted completed by our interior designer is done. We have lighting in a formerly dark room, and an informal dining area in our great room. Nothing has been done in the office, and moving and ordering of additional furniture for our great room is on the backburner while I juggle being a working mom. I have since tried to gain access to digital documents from what the designer suggested and while I can see the design ideas, I have no access to links to the materials she chose. (This is something that I emailed her about and she said there was an issue with Houzz.com and would get back to me–she never did and it was the week I gave birth so I didn’t follow up.) So now I am out a pretty hefty sum of money with no access to design elements other than photos of options. It hasn’t saved me time, and my projects aren’t completed.

Because I was so disappointed by working with this interior designer, I thought I’d suggest ways to make sure you have better success.

We’ve still got a long way to go on getting this house decorated and the projects finished, but with work and our little guy keeping my hands full, it’ll be quite a while until things are actually completed.